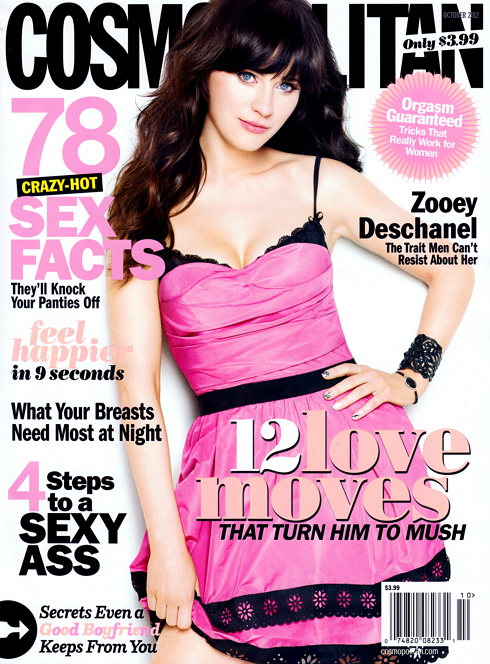 A good headline should step into your prospects head and be part of the conversation — either by continuing a pre-existing thought or by creating curiousity about something new.

Although this wasn’t the main headline on the magazine cover, it was immediately attention-grabbing.

From the October 2012 Cosmopolitan magazine with Zooey Deschanel on the cover:

What Your Breasts Need Most At Night

Everyone immediately pops up with some snarky answer — that’s built into the wiring and gets the conversation rolling. It’s a topic of interest for nearly all men, women, and children.

Once there’s a conversation going on, curiousity steps in: Well, what do THEY think breasts need?

Is this some health warning news? Is it sex-related (as would be expected from everthing else on the cover)? Is it some new special way of treating breasts? Is it some product? A lotion? (Have you noticed how they keep coming up with new uses for vinegar? But I digress…)

Think about it… what do they NEED most?

What do they need MOST?

It’s a seven-word headline that sucks you in just as much as the photo of Zooey Deschanel’s breasts — perhaps even more.

Once the conversation is started, it begs to be resolved. You may have your own ideas, but you have to look. And that’s a headline doing its job.

Can it be made better? I wonder…

I found an interesting online tool, the Advanced Marketing Institute’s Headline Analyzer. According to the analyzer, my headline

What Your Breasts Need Tonight

beat out their headline

What Your Breasts Need Most At Night

I don’t know if the anaylzer is the best way to choose a headline, but it is an interesting way to pre-test a few headlines to see which ones you want to start live-testing with.

My guess would be that “tonight” was a more immediate and urgent word compared to “at night” which didn’t really specify any urgency. And “most” was a good adjective, but unnecessary (that this is a headline suggests already that the answer is something important). — OR it could all be a random flaw in the algorithm. Even after coming up with something great, it is still important to test it in the real world to see what the response is from real people.

… since every good sales letter has a P.S. at the end

P.S. Don’t worry, I know what your breasts need most at night. 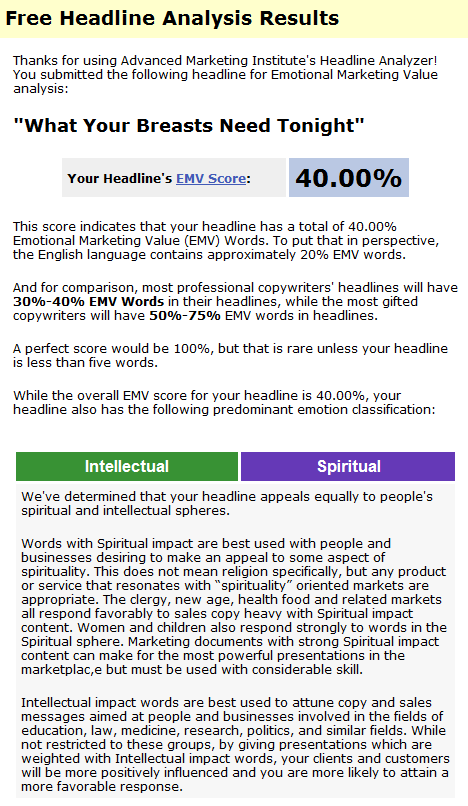 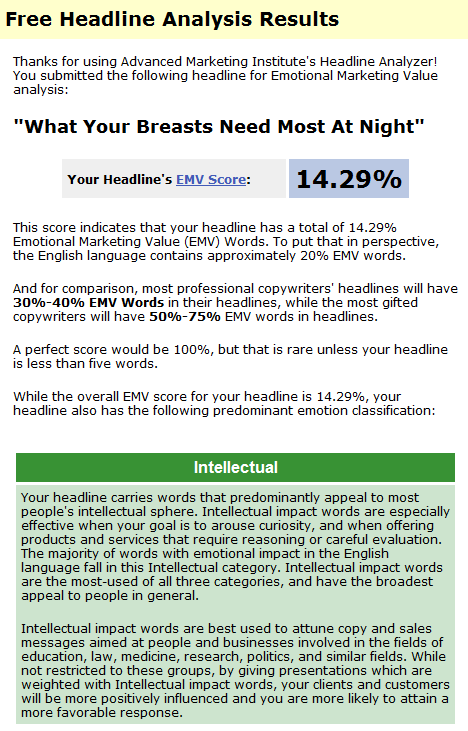